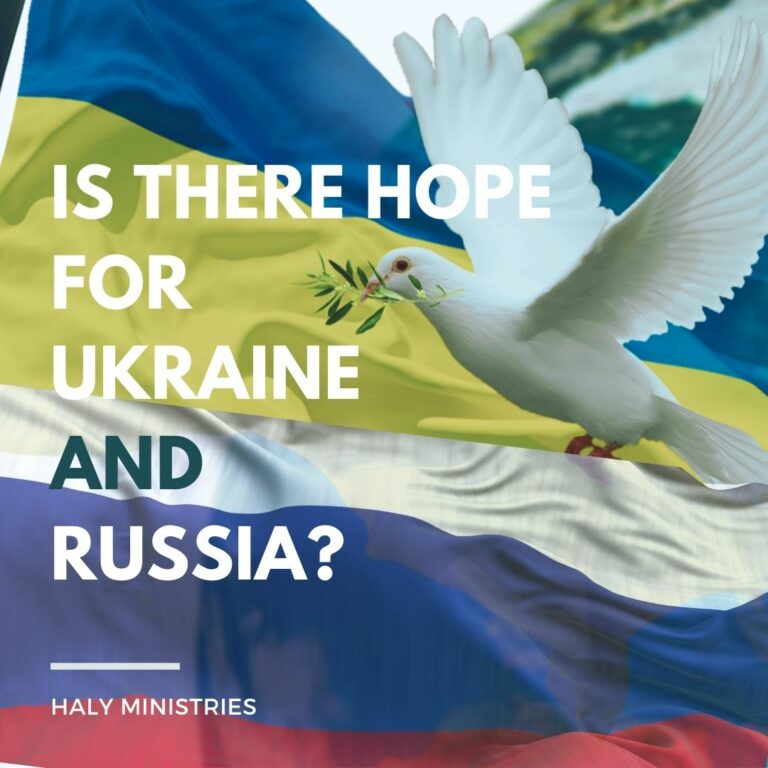 The news about Russia-Ukraine conflict and the current situation in Ukraine have reached many countries.

And because of so much news out there about this war, we may only hear one side of the story and not see another side, and miss what God is doing in the midst of it.

Ukraine and Russia are very dear to me. I lived in both countries and what is happening right now in Ukraine is very sad and tragic.

I do not need to tell you what is happening as you can find all the information you need.

But we also have to bear in mind that there are so many “experts” out there. They talk about what they do not know and do not understand. Among them are also Christians, and some of them are very known to us.

Stop Listening to “experts” in Politics

I read so many opinions, fake stories, and it saddens me. From 2020 to the beginning of 2022, everyone had become a medical expert. Now, everyone is becoming an expert in politics.

People who have never lived in those countries, making their own opinions, according to their own desires. If that person does not like their president and their president is helping Ukraine, then Russia is a good buddy and does the right thing or vice versa.

Is that how we need to discern things?

In 1 Timothy 4:1, it says that in later times some will abandon the faith and follow deceiving spirits and things taught by demons.”

Faith is what we need in later times. Faith in God and not in our governments, or people, or president, or anyone else, or anything else.

We, as a church, need to come back to the true faith!

The Battle is for Our Freedom

Whatever happens on the earth – it is reflecting what is happening in a spiritual world. There is a war between good and evil in a more aggressive and deceptive way.

This battle between Ukraine and Russia is our battle too. The battle we are ALL facing right now is about freedom.

If you think you are far away and it will not touch you, believe me, it will. The enemy hates human beings, and he comes to steal, kill and destroy. (John 10:10). This war will affect the whole world, you and me included.

That’s why we need FAITH and not “experts” in this later days.

As I said earlier, I lived in Ukraine and Russia. And if you ask me to choose between two, and which country I would prefer to live in, my choice would be Ukraine. It is for many reasons. The main reason is I felt freedom there.

Did God Allow this War?

Many are asking, “Where is God, and why did He allow this war?”

Is this war allowed by God? First, I want to remind you that God is love and what He wants is love, peace, and joy. But prophecies, which are written in the Word of God, can’t be changed.

Don’t forget, we are heading to the battle of Armageddon where ALL the nations will come against Israel. Will it happen? Yes, this is the Word of God. Is it cruel? I don’t know. Can I judge what God has said? He is God, and He knows why some things are allowed.

God is awakening His church from her deepest sleep and bringing His purpose to this broken world!

Please pay attention to that last sentence – Bringing HIS Purpose to the Broken World!

Jesus said in Matthew 24:6-7, “And you will hear of wars and rumors of wars. See that you are not troubled; for all these things must come to pass, but the end is not yet. For nation will rise against nation, and kingdom against kingdom.”

It is a very difficult time for the Ukrainian people. But that is not just for Ukrainians, and for Russians too.

We are all being fed by propaganda, by our governments, or media. No country can escape that.

The propaganda which was feeding Russian people for years is there.

I did read some comments and interviews from Russian independent news (they are forbidden now), and I was shocked. Mothers and fathers who had children themselves were approving this war.

Jeremiah 17:9 says that “the human heart is the most deceitful of all things and desperately wicked. Who really knows how bad it is?”.

Deceitful and wicked hearts – that’s us without Christ and His Word in us.

Many in Russia do not see who is their real enemy, but this comment has given me hope that some do see and understand:

“I hate to look at myself in the mirror and I am among Russian people. Now, I can’t see my mother, I hate her talking about the war. I hate myself because I can’t stop killing innocent people.”

Repentance is the Way Forward 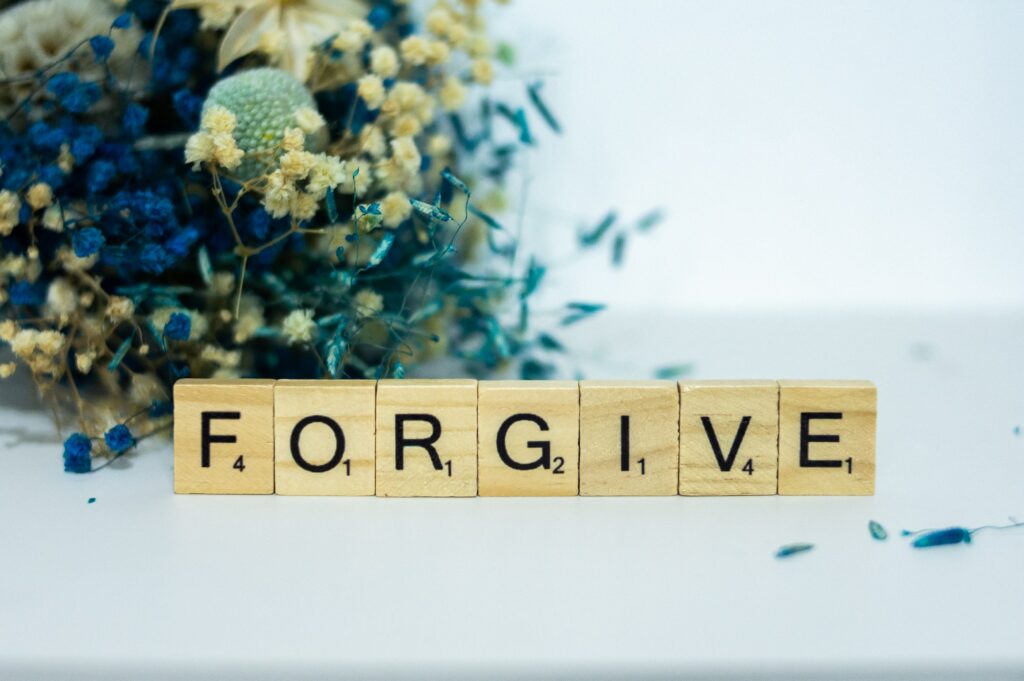 Forgiveness is our Freedom

But can I judge Russian people? No. They have already been judged by their words and deeds. But I believe there will be repentance.

I believe their eyes will be open to the truth.

Israel messed up many times. And because of their disobedience, they had wars and were occupied by other nations. But they knew the way to their freedom was their repentance.

That’s my prayer for the Russian and Ukrainian people. May their repentance and forgiveness lead to their freedom.

Is there Hope for Ukraine?

My friends, Ukraine wants to be free. But this choice, the choice of freedom, cost this country lives. Ukraine went through not easy times. Holodomor or “Ukrainian genocide” which happened in 1932-1933 was one of them.

The enemy always wanted to get rid of the Ukrainian people. And this is happening again.

I wrote an article about Ukraine in 2019, “Prophetic Word for Ukraine – Sailing Adventure!”

But the Lord is saying, that if He started His work in you, Ukraine, He will complete His work. No matter what and who comes against you, the Lord will defend you!”

The Lord will defend Ukraine!

“It looks, your ship is stuck in its place, and not stable, Ukraine. But the Lord will bring it back to its stability, and you will be able to move forward, and not only forward but in any direction, led by God’s Spirit. You will enter many international ports, bringing healings, deliverance, speaking about God’s Kingdom!!

Is there Hope for Russia?

The Word says, “Do not be deceived and deluded and misled; God will not allow Himself to be sneered atFor whatever a man sows, that and that only is what he will reap.” (Galatians 6:7 APMC).

When I was a child, my grandmother said these words, “Some of Russian lands are going to be occupied by China.” She said those words when China was economically and militarily weak. It was unbelievable at that time, but I kept those words in my heart.

If you look at a relationship between Russia and China now, what she said is becoming as real as ever, and it will progress, especially after all the sanctions from the Western world.

The time will come when Russia will be wounded when it does not expect it. There will be betrayals like someone stabs a knife in the back. There will be consequences and they will be severe.

There is Aways a Chance!

So, what? Is there hope for Russia?

Boris Nemtsov, who was a Russian politician, assassinated in 2015 near Kremlin for his political views and strong opposition, said these words,

This is my country. The Russian people are in a bit of trouble. Russian courts don’t work. Russian education declines every year. I believe that Russia has a chance to be free. Has a chance. It’s difficult, but we must do it.

I also believe that Russia has a CHANCE!

In my article about Russia, Belarus – From Dictatorship to Democracy, I wrote these words:

“The Lord is saying those nations will not be tied up by fear any longer but will be set free. People will not be afraid to go against corrupt political, security forces, and judicial systems. Some will shed their blood for their freedom, but they should not be afraid. Freedom costs something or even someone. It is costly.”

Freedom is Only in Christ

Freedom is costly, my friend.

And Christ offered that. Your freedom and mine cost the Lord His life. He offered His freedom to you and me, to the Ukrainian and Russian nations, to your nation.

“It is for freedom that Christ has set us free. Stand firm, then, and do not let yourselves be burdened again by a yoke of slavery.” – Galatians 5:1

The name of Jesus is the key to unlock every situation. It is the master key that opens the door to every freedom.

Justice Kojo Bentil is so right. It is only the Name of our Lord Jesus Christ which unlocks any situation and opens the door to every freedom.

Do you see your situation as locked and door to freedom closed? Call the Name of Jesus. You do not need many words to bring Him into your life. He is there, in the midst of your troubles and willing to help you and free you from your burden.

Prayer is the Key to Freedom

We can’t just sit and take one side or another. We need to pray that people will repent, be saved, and be free from their oppressors. We need to come back to FAITH!

Freedom is a gift given by God to every person on this earth. And this gift is given not only to Ukrainians but to Russians too.

And this is my prayer for Ukraine and Russia (from Daniel 9):

“Oh Lord, you are a great and awesome God! You always fulfill your covenant and keep Your promises of unfailing love to those who love You and obey Your commands. But we have sinned and done wrong. We have rebelled against You and scorned Your commands and regulations.

Lord, You are in the right; but as You see, our faces are covered with shame. This is true of all of us because of our disloyalty to You.

Oh Lord, we are covered with shame because we have sinned against You. But You, our Lord our God, are merciful and forgiving, even though we have rebelled against You.

We have not obeyed You, for we have not followed the instructions You gave us through Your servants the prophets. We have disobeyed Your instruction and turned away, refusing to listen to Your voice.

Oh Lord our God, in view of all your faithful mercies, Lord, please turn your furious anger away from Ukraine and Russia.

Oh our God, hear Your servants’ prayer! Listen as we plead. For Your own sake, Lord, smile again on those two lands.

Oh my God, lean down and listen to us. Open Your eyes and see our despair. See how cities lie in ruins. We make this plea not because they or we deserve help but because of your mercy.

Oh Lord, hear. Oh Lord, forgive. Oh Lord, listen and act! For Your own sake, do not delay, Oh our God.

Thank You, Father, for Your mercy, grace, and forgiveness. Amen.”

2 thoughts on “Is there Hope for Ukraine and Russia? – Prophetic Word”