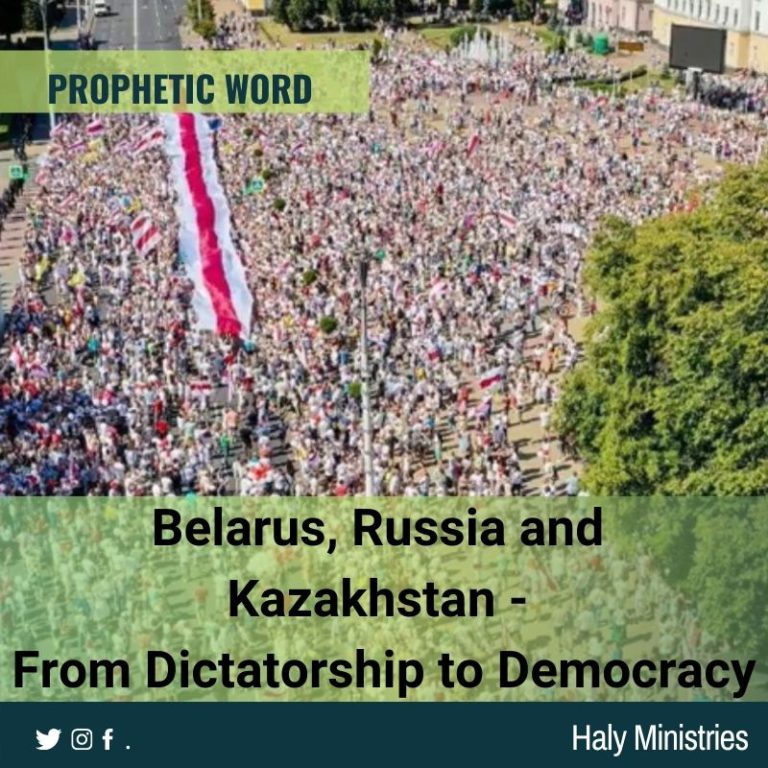 This is a Prophetic Word for Belarus, Russia and Kazakhstan, “From Dictatorship to Democracy.”

In Psalm 1:4 it says that “the wicked [those who live in disobedience to God’s law] are not so, but they are like the chaff [worthless and without substance] which the wind blows away.”

In the beginning of this summer, the Lord highlighted three countries, saying that Belarus, Russia and Kazakhstan will be free from dictatorship. I mentioned this to my newsletter subscribers. God said that no man’s power will be able to stop God’s plans for those three countries. No matter how much power might be used against people, the Lord is saying, thrones, where self-appointed men are sat, shall be removed and given to others.

The Lord also gave me a dream. I saw people sleeping wearing pyjamas. They were sleeping outside. Then like by the sound of a trumpet, people started waking up and getting up. The pyjamas were different and each represented its country. I saw on some people were bear pyjamas.

The Lord is saying those nations will not be tied up by fear any longer but will be set free. People will not be afraid to go against a corrupt political, security forces and judicial systems. Some will shed their blood for their freedom but they should not be afraid. Freedom costs something or even someone. It is costly.

To free all people from sin, pain, sickness, it cost God the Father the life of His Son but what a joy to know that Satan was defeated at the Cross and we are free from the devil and his plans. All humans have a choice to choose freedom or live in bondage. The Lord is giving us a choice.

The same for Belarus, Russia and Kazakhstan. There is a choice and people will choose freedom over the dictatorship. People are waking up. The less will become more. The few will become many. The dictators will be like rats out of their holes and like rats fleeing their sinking ships. Even their close friends will become a close enemy.

Why did I see people sleeping on the streets in a dream? Because freedom would not be just a wish in their homes but it will be expressed outside, on their streets.

People of Belarus, Russia and Kazakhstan will not be afraid of repressive measures any longer. Those threats are to scare them but they will not be able to break people’s spirit. Why? Because they will understand one KEY which will help them to overcome any suppressive situation. And that one key is UNITY! Unity will prevail!

1 thought on “Belarus, Russia and Kazakhstan – From Dictatorship to Democracy”