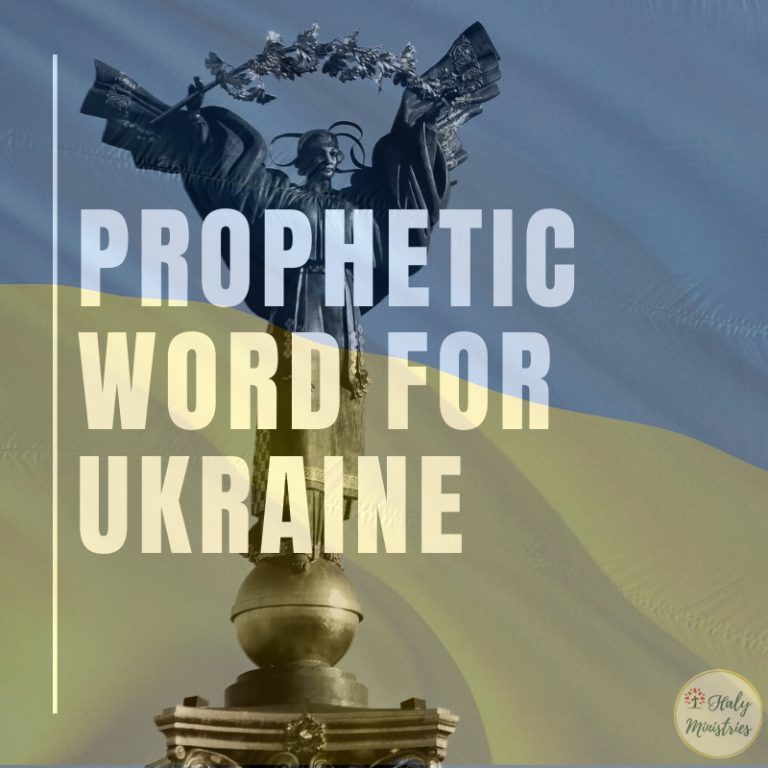 I had night vision on the 26th of October 2019. The Lord put me on a deck of a huge ship – Ukraine. The ship lost its stability, listing heavily to the right side. I cannot describe all the emotions on that ship. There was fear, panic, anger, uncertainty, disbelief. Then the Lord took me out and put me on the shore. I saw this vision of the listing ship from the shore as well. It looked like an unbalanced ship on water and needed help.

I did not understand what that vision was all about. On Tuesday, the 29th of October, I asked the Lord to lead me and show me the meaning of the dream. The same day, I felt I needed to check Ukrainian vloggers. It did not take me too long to find a short video of one vlogger who gave descriptive information about the latest Ukrainian news.

The vlogger said that the president of Ukraine, Volodymyr Zelensky, visited a Ukrainian army and volunteers, who were defending the country from occupants in the East of Ukraine. The president visited them the same day I saw the vision, and he told the Ukrainian army, “I am a normal passenger and we’re travelling by the same train, called ‘Ukraine’.” Then the vlogger added that the nation should not be on a train, but supposed to be on a SHIP! My jaw dropped! It is only God can put all these together, and bring it as one!

He was so right. Ukraine is the ship. The train does not have freedom, but the ship does. The train goes from point A to point B. It just follows the route. The ship has got much more freedom.

After the Ukrainian president’s statement that he was just a passenger, it left me with many questions, “Who then is a driver? Who is driving the train? Who has prepared that route for Ukraine? Does it mean, that the fate for Ukraine has been already sealed by someone and the president does not need to be involved in this?”

Through this vision and president’s statement, I understand one thing, there is no captain on that ship and no trusted crew.

I asked the Lord, “What now, Lord? You can’t just give the vision with the problem and with no promise.

The Lord reminded me of two things:

Apostle Andrew, one of the disciples, reached the place called now Kyiv and he said to his disciples, “Do you see those mountains. On those mountains, the glory of God will shine. There will be a Great City, and God will build many churches.” Then the apostle ascended the hills, blessed them and set up the CROSS!

In the last days, Ukraine will birth many missionaries. They will feed the nations with spiritual food and will build many churches around the world. Thank You, Jesus.

But the Lord is saying, that if He started His work in you, Ukraine, He will complete His work. No matter what and who comes against you, the Lord will defend you.

This is a time of resistance. Not an easy time. During the resistance will come purification. But this is not the end. There will be a time of God’s response. God will send His angels in response to your prayers, Ukraine.

It looks, your ship is stuck in its place, and not stable. But the Lord will bring it back to its stability, and you will be able to move forward, and not only forward but in any direction, led by God’s Spirit. You will enter many international ports, bringing healings, deliverance, speaking about God’s Kingdom!

Keep trusting the Lord, Ukraine! Nothing is wasted. William Arthur Ward said, “The pessimist complains about the wind; the optimist expects it to change; the realist adjusts the sails.” Do not complain, do not expect somebody to do something for you. Adjust and set your sails to soar with the wind! Get Ready!

Praise the name of God forever and ever, for He has all wisdom and power. He controls the course of world events; He removes kings and sets up other kings. He gives wisdom to the wise and knowledge to the scholars.
Daniel 2:20-21, NLT