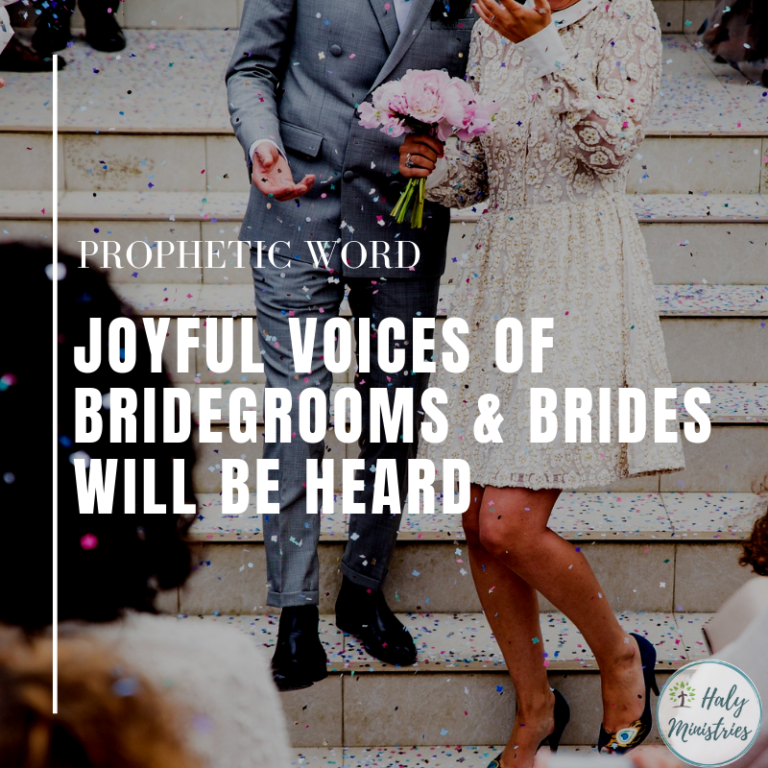 Great News! Weddings! Wedding Celebrations are ahead! Joyful Voices of Bridegrooms & Brides will be Heard! Started last week what I could hear was WEDDINGS.

The Father always confirms His word before I release it.  On Monday, we received a phone call from a young man asking if we would like some beverages and other things which was left from a wedding party. Have you noticed? – WEDDING party. We thought it was going to be just a few things. A big van stopped at our house. Two young men were bringing in a box after a box filled with staff. In the whole package there was a supply for our staff member who is pregnant and needed a high chair. God is so awesome! We did not know anything about these two young men. We even did not have a chance to ask why they called our number. They unloaded the staff and left.

On Mondays, I send an email to my subscribers. I included this testimony in a newsletter. I received a reply from one lady, who told me she just came back from her friend’s house and she was offered food which was leftover from a family WEDDING. There are no co-incidents with God my friend. He confirmed, this Word is Yes and Amen – there will be WEDDINGS! Hallelujah!

I was reminded of the story about David, Nabal, and Abigail. David sent ten men to Nabal to remind him that his shepherds were not mistreated by his men and nothing of Nabal’s was missing. David requested that Nabal would give his men whatever he could find for them. Nabal’s reply was very harsh and remarks were rude. “Who is this David?”, he asked. David was very angry, he decided to take revenge. He and four hundred men got ready to wipe Nabal’s family off this earth. But thankfully Abigail, Nabal’s wife was a very wise woman. She prepared a large quantity of supplies and sent her servants ahead of her. She managed to meet David and his men before the disaster. She pleaded to accept gifts. David accepted gifts and his anger was turned away because of Abigail’s wisdom and kindness.  He sent Abigail home in peace. Nabal did not know what happened. He came home holding a banquet like that of a king. He was very drunk. Abigail told him nothing and waited until the next morning. Next day when Nabal was told what had happened, he was so terrified that his heart failed him, probably had a heart attack. He died ten days later. When David heard about Nabal’s death, he asked for the hand of Abigail and they got married. (1 Samuel 25)

The root of the name of Nabal means failure, Abigail mentioned to David that Nabal’s name meant Fool, and that is why he acted foolishly towards David and David’s men.

You feel you have failed. You feel you are a failure. You went through a difficult marriage, not easy divorce because of Nabal or Nabala in your life. At the beginning of your relationship, everything seemed alright and you were so happy, but then the reality hit you. Some of you think that you failed because you chose to marry ‘Nabal’ or ‘Nabala’. You wish to bring that time back and undo everything that was done foolishly.

The Father wants to encourage you to move on. Stop thinking about ‘Nabal’ and ‘Nabala’ or your past failures. That marriage is failed, it is dead. You were rejected, betrayed, one day loved, the next day was not, was abused. You said that’s it, there’s no hope, no future hope to get married again or get married, but God thinks otherwise.

The great news is ahead! There will be a wedding. The Father is going to lead you to your David or Davida, to your beloved and loved by God. Do not lose your heart, do not think there is no future. There is a future and there is hope. You will see the light. You will experience a new life with a man or woman who loves God.

You will have a wedding, a great party, and leftovers from your wedding. Not only your wedding party have abundance, but your life will also be filled with the abundance of God too.

“The joyful voices of bridegrooms and brides will be heard again, along with the joyous songs of people bringing thanksgiving offerings to the Lord. They will sing, ‘Give thanks to the Lord of Heaven’s Armies, for the Lord is good. His faithful love endures forever!’ For I will restore the prosperity of this land to what it was in the past, says the Lord. (Jeremiah 33:11 NLT)

Hope this Word has encouraged you. I am looking forward to receive an invitation 🙂