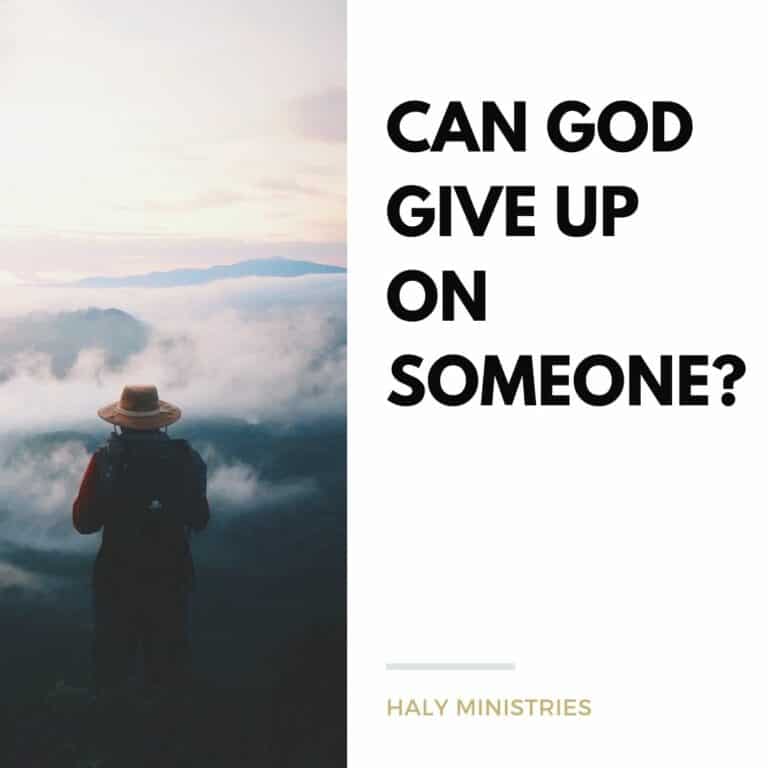 He who did not spare his own Son, but gave him up for us all—how will he not also, along with him, graciously give us all things? – Roman 8:32 (NIV)

You have probably done something so wrong. You don’t think God will ever forgive you. So you are sitting there in tears asking yourself, “Can God give up on someone? Have God given up on me?”

The truth is that God is long-suffering; He doesn’t give up on any of His children. But God will not force us to walk in His ways. He has given us free will to choose life or death. It’s up to an individual what he or she chooses.

Religion will mislead you into thinking God is hard and unforgiving, but that is not true. God doesn’t have intimate relationships with perfect people. He called David a murderer and adulterer, a man after his own heart (1Samuel 13:14).

What are the Reasons why God will Never Give Up on You?

Our Heavenly Father is the true definition of love (1 John 4:7). Though He knew that we would not be faithful to Him, God still created us. He did not give up His son because we would all accept and worship Him.

No, God knew that some people will reject His son Jesus, but that did not stop Him from giving up His beloved Son. Can you do that?

Can you give up your only child for people who don’t even care? Can you allow your son to die in place of people who curse and blame you for wrongs that happen in this world? Honesty, only God can love us like that.

Now, if He did not spare His only son, how will He give up on you? If He gave up His Son for you, how is He going to abandon you just because you failed? How will He turn away from you when He already did that to His Son at Calvary?

We live in a cruel world and have rubbed shoulders with some brutal people, so we find ourselves measuring God’s kindness and character based on how we have been treated. But it should not be like that because God is a kind Father.

He is not waiting for you to make the next mistake so that He can send you to hell. God knows you will mess up anything, but He still draws you to Himself so that you don’t live under condemnation.

Though we live in a world where people show kindness with hidden motives, we should understand that God’s kindness is genuine. (Romans 2:4)

God has promised in His word to never leave us nor forsake us. This means that God doesn’t give up on us. We are the ones who actually give up on Him. See, like any other relationship, you need to be actively involved in your relationship with God. Sadly, most of us want to chase after every other thing but God.

Our Heavenly Father is our defender. He will not leave you in your time of need. Do not run away from Him when you mess up.

Instead, run towards Him and let Him help you in your time of weakness. Do not determine what God can do based on what you have done or can do. His ways are not our way, and His thoughts are not our thoughts. (Isaiah 55:8-9)

See, God is not sitting in Heaven waiting for you to make one wrong move so that He can give up on you. The children of God sinned time and again. Even though God warned them many times, they went back to their sinful ways and only turned around and repented when life became unbearable for them.

Though they went into captivity several times, God always forgave them and brought them back. The Bible says God is the same. He never changes.

God knew you would mess up even before you did. That is why He gave up His only Son two thousand years ago. Though He is holy and a righteous judge, God doesn’t get shocked by what you do.

The same way He forgave the children of Israel is the same way He will forgive you. But you need to humble yourself before Him and repent.

Jesus lived on this earth and He knows the challenges that we go through. He understands humanity, for as a Man, our King of kings was tempted in every way just as we are, and conquered sin. (Hebrews 14:4) God also knows that we have flaws so we will mess up from time to time.

He presents us with different chances to run to Him and, like the prodigal son’s Father, waiting for those who mess up to return to Him. When we return to Him, He welcomes us with open arms and restores the things we lost because of our sin. (Luke 15:11-32)

Have you Done Something or Know Someone that has Sinned Against God?

Yes, God is a righteous Judge, He is Holy, but He is also long-suffering and abounding in love.

What does God do When we Give Up?

Like the story of the prodigal son, God is waiting for you with wide-open arms. He is ready and willing to forgive you.

Do not let other people or the enemy fill your mind with thoughts of fear and doubt.

Running to the Lord is Your Best Answer

Run to God and ask Him to forgive you all your sins. If you are struggling with sin, ask God to help you overcome it so that you can live victoriously.

It may be hard for you to understand how a righteous God can love us and forgive us when we fall. You can’t understand with your rational mind, but only with an open heart. Open your heart before Him and let Him fill your emptiness with His love. There is no person who can fill your heart with peace, joy, and love, but only God.

If you found it difficult or ashamed to come to the Heavenly Father, today is a new day! Come to Him! And as you come, remember, that God is there for you, not against you. He is not angry with you, or mad at you, but He is loving, all-knowing, faithful, kind, and long-suffering.

I pray that all inaccurate impressions about God will be removed. And may the truth of God fill your heart. Amen. Thank You, Lord!

Listen to the message by Pastor Steven Furtick, “God Has Not Left You.” I hope this message will encourage you. God will be with you in the process!