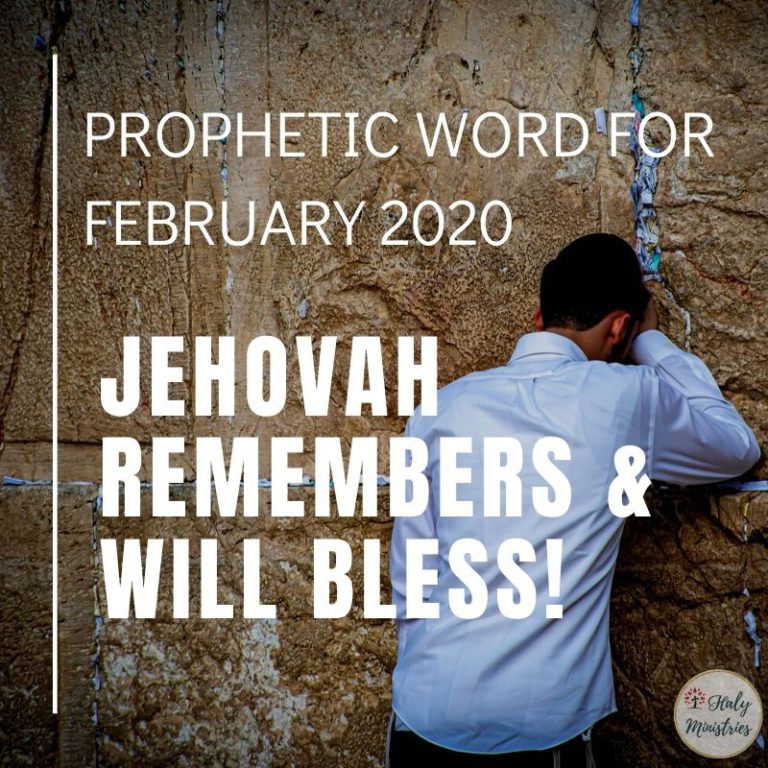 This a prophetic word for February 2020 – Jehovah Remembers and Will Bless at the Appointed Time.

We are approaching great and wonderful things of God in our lives and also globally. Starting from February and in the following months, we will see some prophetic words given to Zechariah come to pass in our lives.

This month the Lord was pointing me to the book of Zechariah. In the 1st chapter, verse 1 it says, “…The word of the Lord came unto Zechariah, the son of Berechiah, the son of Iddo the prophet.”

There are three names which have significant meanings for the future prophecies over your life and nations, especially Israel.

Prophetically it will sound, “Jehovah remembers and will bless you at the appointed time.”

Previous years we were carrying the vision, dreams, desires in our hearts. We experienced lots of heat. The Lord is encouraging you, that what was sown in the past was not in vain. Yes, it was not easy, but Yah remembers! Those prophetic words which were spoken over you were not forgotten by Jehovah.

God Has Not Forgotten You

The Jews and Zerubbabel, their political leader, had returned from a seventy-year captivity and thought they were forgotten. They went through “silence time.” In a dry season, maybe you thought you were forgotten by God, but the Lord is saying to you that He has not forgotten you. God remembers every promise He has made to you, to your family.

We have entered the eleventh month of the ecclesiastical year on the Hebrew calendar, called – Shevat or Shvat, the month of renewal and rebirth.

The first mention of this month was in Zechariah 1:7. In the month of Shevat in a single night, God gave Zechariah 8 visions.

God will remind you of your past prophetic words, but He will also tell you the continuation, the future prophetic words. This month is when you will receive God’s revelation about your future. God is going to renew your past visions and rebirth the new ones.

The Meaning of Number 11

Maybe you heard from some resources that number 11 is not a good number. Its meaning speaks about the disorder, lack or incompleteness. The enemy perverse everything. He always takes what is God’s, change it, reverse it, and then implement it as his own.  In the occult, numbers are very important and 11 is one of them.

But for us, number 11 is an ‘awake’ number. In the eleventh month, Zechariah received visions to the leaders. Through those visions, God awoke Zerubbabel, political leader from his sleep.

The incense had 11 spices. In the Bible, only 4 were mentioned. But through generations Jews believed there were 11 spices, 4 were written by Moses and 7 were communicated orally to Moses. Galbanum was one of them. It created a stronger sweet smell and brought the incense to its full potential. Galbanum is so strong that if a person is rubbed with it, the snake will avoid him. Isn’t it God amazing? Jesus taught us to pray, “Deliver us from the evil one.” Galbanum was not just a spice. It speaks about God’s deliverance from evil. Galbanum awakes the incense!

Number 11 awakes dreams, awakes visions, awakes your journey. God will give you more understanding of your future and its significance and will bring you to a full potential which you have in Christ Jesus. You will be trampling on serpents, and over all the power of the enemy, and nothing shall hurt you. During this month you shall receive the blessings from your Heavenly Father.

BUT… There are a Few Things We Have to be Aware of:

A Battle will Come.

If you think that the devil will leave you alone, think again. You always need to be on your guard.

Like this happened to Zerubbabel and Jews. Upon their arrival to Jerusalem, they were so enthusiastic to rebuild the temple. They began well, but after one year, they had given up. Instead of continuing the work, they started building their own houses.

Why did they give up? They faced:

Maybe it’s you? You have doubts, fear, insecurity, negativity within. Maybe you listen to the news, listen to negative reports, negative people who say to you, “Why do you think God cares? Look how many casualties. Where is your God? And who do you think you are? The future is going to be worse, not better. Look at your pastor, your church is bad and you are not an angel.”

That’s what happened to Zerubbabel. The call or vision can thrive or die. In Zerubbabel’s case, it died. He lost the battle. The work of rebuilding the temple stopped for 16 years.

What Shall Our Response Be?

The Lord had given Zerubbabel the best advice!

· Come Near to God

Zechariah 1:3 “Return to Me, and I will return to you,” says the Lord of hosts.”

Does it echo the verse from James 4:8, “Come near to God and He will come near to you”?

That’s an invitation and God’s promise. God wants to reassure you that when you come close, He will always respond.

· Remind Yourself of those Visions, Dreams

It’s always good to write your visions, dreams, words down and read them again, especially when you are discouraged.

· Look at the Cross!

God Will Never Leave You

Even Zerubbabel lost his battle and stopped the rebuilding of the temple, which lasted for 16 years, the Lord did not give up on him.

The Lord will not give up on you, too. He will not leave you but will be with you. I hope this prophetic word will do exactly like that. It will:

And I would like to encourage you with this verse, the verse God encouraged Zerubbabel with:

“So he (God) answered and said to me: This is the word of the Lord to Zerubbabel: ‘Not by might nor by power, but by My Spirit,’ says the Lord of hosts.” – Zechariah 4:6 (NKJV)

Your strength, your power will not be enough, but His Spirit will be!

Jehovah remembers you and He will bless you timely, at the appointed time! Do not give up. Stay Strong and continue building your dream by God’s Spirit. Amen.

6 thoughts on “Prophetic Word for February 2020 – Jehovah Remembers and WILL Bless!”