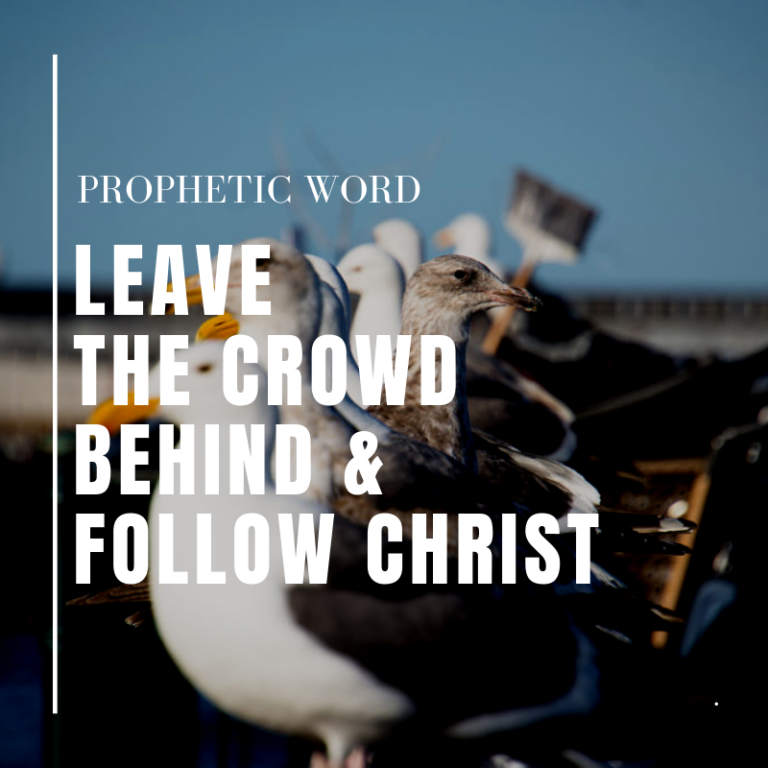 “Those who follow the crowd usually get lost in it.” Anonymous

Then after that invitation to go over to the other side, in Mark 4:36 the Bible says: ‘So leaving the crowd…’ To receive your healing, your promise, your freedom, your financial freedom, you will need to leave the crowd.

God Asked Abraham to Leave the World Behind

Maybe you think, to leave the crowd? What? Probably Abraham also thought the same.

In In Genesis 12:1 God called Abraham and told him to get out of His country, from his family and from his father’s house, to a place God was going to show him. God asked him to leave everything behind: his customs, his land, his people, his family, and trust God on the process. God said if Abraham did what was asked from Him, to leave the crowd behind, he was going to be blessed, be a blessing, and God would make His name great. Those were great promises from God. And if God says something, then He means it. The same applies to us as well. Nothing has changed.

Jesus Asks Us to Leave the World Behind

To be a Christian means a lot, it means that you are Saint (someone set apart by God for His works), someone who has been brought out of the world into the path of Christ – Jesus selected us and expect us to leave the world behind.

We are not changed physically only but we are changed spiritually which affects our mental state – we tend to think differently and act differently from the way everyone in the world will act. When Jesus came to this world, He did some unexplainable things. It was not a normal thing for someone to naturally walk on water, Jesus went the opposite. Now that we have been called unto Him, we must do some things that are directly opposite the things the human thoughts.

There are some people that have done some things the world may call foolish but was successful.

“It is not until you do what others are doing before you record a success.”

In Luke 6:38 Jesus teaches us to give, and if we do, it will be given to us: good measure, pressed down, shaken together, and running over will be put into our bosom. This simply means everything about God, is different from what the world thinks.

Isaiah 55:8 “For My thoughts are not your thoughts, Nor are your ways My ways,” says the Lord.” For this reason, what you do must be different from what the world does.

How to Set Yourself Apart from the Crowd

1. Your Decision is to BE Different

Making this decision to be different from the rest of the world, we’ve got to give it what it takes. The first is you. This might look strange but it’s the truth – if you want to be different, if you want to do things that are uncommon and record a good success, then you must be fully involved. The path is not an easy one, it requires the power of God to keep you on the course.

2. Your True Value is in the Word of God

Let the Word of God will not depart from your mouth, but meditate on the Word day and night… For then you will make your way prosperous, and then you will have good success. (Joshua 1:8)

I love the quote of my favourite man of faith, who changed the way of my thinking what faith is all about. His books helped me to move in supernatural. He said: “There are four principles we need to maintain: First, read the Word of God. Second, consume the Word of God until it consumes you. Third believe the Word of God. Fourth, act on the Word.”

The Word of God will help you to stand strong on the promises God has given to you. Be like  Abraham, he stood on his promises, and believed God.

3. Get Yourself into Prayer

Prayer is part of what you must use to keep yourself going. You must get yourself into prayer. Prayer is a key that unlocks every good thing. It doesn’t matter how long it has been impossible for you to achieve a particular thing. With prayer, there will be a solution.

Hannah was barren until she prayed to God and God answered her. She knew the power of prayer and she used it, she expressed herself before God, she established communication with him. 1 Samuel 1:10 “In her deep anguish Hannah prayed to the LORD, weeping bitterly.” Hannah prayed in an uncommon way, even the prophet could not understand her, her prayer was different from the others. Prayer has the power to bring you out of such a situation.

When Paul and Silas were imprisoned for doing the work of God. They didn’t keep mute, they knew the power of prayer, they knew that is the best way to communicate with him, they started prayer and singing. Acts 16:25-26 “And at midnight Paul and Silas prayed and sang praises unto God: and the prisoners heard them. And suddenly there was a great earthquake so that the foundations of the prison were shaken: and immediately all the doors were opened, and everyone bands were loosed.”

4. Your Decision is to Leave the Crowd

Ten of the spies choose to be selectively blind to what God has done for them in the time past. Two of these spies refused to follow the multitude. We have been warned not to follow the multitude, we must be different and think differently. Exodus 23:2a “Thou shalt not follow a multitude to do evil…” Caleb and Joshua stood out, their thoughts were totally different from the way others think.

“You can’t think the way everyone thinks and have a great achievement that will set a new record.” Caleb and Joshua remembered how God has saved them before, even though, the people in the Land of Canaan are giants and powerful, God will help them. The major difference between the two and the other ten is that the ten spies were seeing just their armours and weapons but the two were seeing God fighting for them.

The consequence of following the crowd is that you will be discouraged to do the right thing, they will never encourage you. This is the main reason why Joshua and Caleb turned away from the crowd, they wanted to make an impact, they wanted to make a significant impact on the earth. If you want to grow and make an impact, you have to think in a way that is different from others. You must not allow anyone to mislead you. You can always find courage in God, God is there to encourage you. Joshua when he refused to follow the crowd, he turned to God for encouragement. Joshua 1:9 “Have I not commanded you? Be strong and of good courage; do not be afraid, nor be dismayed, for the Lord your God is with you wherever you go.”

5. Surround Yourself with People of Faith

In this life, if you want to be extraordinary, if you want to want to go a different way that will yield a different and good result then you must surround yourself with the people that have left the world behind too, the people of God. The reason why most people don’t achieve or go far in life is that they are surrounded by the type of people that discourage alone. It is necessary to leave this type of people. This might seem hard because we don’t want to abandon the people we have been spending most of our time with. I’m not saying you should abandon the people you love for the sake of starting a new beginning but just look for some fresh people that can help, make friends with believers, and make them your family. The main reason for this is because they will guide you, help you maintain your steps.

The people you move with defines you a lot. They can determine how you will live your life and how far you can go in life. The old friends that causing you pains and causing you to fall, you must start to evict them from your life now – go for a new relationship, follow the kind of people that can make your life move forward, those that will affect your life positively.

Above all these, the greatest Friend you can ever have is Jesus Christ. Start a relationship with Christ. He is a Friend to all, He will make things work out for you. Stay with Jesus.

The people of this world are full of negativity, what they cause is bad energy radiating around you. There is no way there would be a positive result in someone’s life if the source and the connection to the source of this negativity are not disconnected.

”The person who follows the crowd will usually get no further than the crowd. The person who walks alone is likely to find himself in places no one has ever been before.” Albert Einstein

Go and find yourself in places no one has ever  been before. Do not just decide to go to another side, but leave the crowd and choose to walk with Jesus wherever He will lead you to.

If this Word has encouraged you, or helped you, please comment below. I would love to hear from you. Blessings.