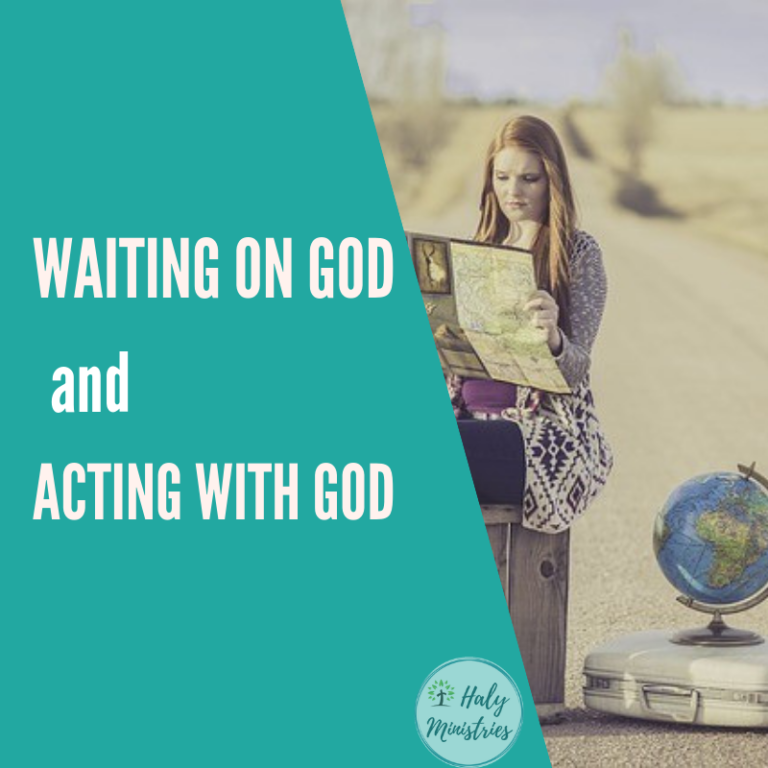 Sadly there are so many discouragements in the body of Christ about their promises not being fulfilled. “I have been waiting and waiting, they say, and still nothing. Where is my promise? Where is my prosperity? Where is my success? Where is my healing? Why my family is not saved yet?”

There is so much confusion about the Word “waiting’. In Hebrew it means : to wait or look eagerly for; to collect, bind together.

Waiting is not sitting passively my friends. In the word ‘waiting’ there is an activity, not passivity. Many times in the Bible we see, God gave people ideas, structures and they did not wait for God to come down and start building or releasing it to happen, but they, men and women of God, made those ideas real and possible.

Noah did not wait for an ark to be built or waiting for God’s angels to descend and build it. He took the tools into his hands and started building, waiting for the rain to fall down. He did not just wait for the rain. He would be in the same state as all people, he and his family could perish with them. God told David it was not him who was going to build a house for Him, but his son. David would just sit and do nothing. He would just say, “Oh, then if it is not during my times, then why even bother?” Do you know that David gathered gold, silver, fabrics for the future temple of God?

Solomon was using many things which David stored. David in his heart saw it. Yes, he knew he would not see it with physical eyes, his son would, but he did not give up, did not become upset. He faithfully stored for the future building.

Perhaps the most popular verse of scripture on waiting on God is Isaiah 40:28-31. It is rendered in an interesting way in the New Living Translation, especially the last verse.

“Have you never heard? Have you never understood? The Lord is the everlasting God, the Creator of all the earth. He never grows weak or weary. No one can measure the depths of his understanding. He gives power to the weak and strength to the powerless. Even youths will become weak and tired, and young men will fall in exhaustion. But those who trust in the Lord will find new strength. They will soar high on wings like eagles. They will run and not grow weary. They will walk and not faint.”

The idea many believers have about waiting on the Lord is one that implies that you shut down your activities and just remain in inactivity. So God gives us a promise in an area of our lives as He’s done in this verse of Isaiah’s book above and we are just waiting inactively without doing anything in line with what God has said. We think that God is going to bring it on at the time He wants and all we do is wait. This is not the idea of the verse seeks to entrench in our hearts.

The original sense of the expressions “find new strength” in the last verse connotes something much closer to “exchange strength” or “increase in strength.” It implies that you need to increase in strength have a previously notable strength level. You must be on your way towards the land of promise for you to see the walls of Jericho come down and the Sun stands still; for you to see an exchange of strength. If read in the original it would sound like “They that wait upon the Lord exchanges (increases) strength, goes up on eagles wings, running not weary, walking not fainting.” Reading from verse 28 shows us that the emphasis of the waiting is to help the one tending towards weariness to be straightened and energized to continue even on a greater frequency.

In waiting, therefore, we are not inactive, we are working on fixing our eyes on the word of God, enforcing it with our mouths and taking corresponding actions in the direction that we have been shown of the Lord. We don’t sleep on it while waiting. Waiting is working on it as the Lord nudges.

Every promise of God is a call to prayer. Nowadays people receive prophecies of good and wonderful things the Lord would do for them and then they go to sleep. That’s inappropriate. Once you receive a word, it becomes your responsibility to guard it and nurture it till you see it come to pass. Waiting is not wasting!

This is the idea the saints of old had about waiting. Remember after the resurrection of the Lord Jesus, just before His ascension, directed the disciples to tarry. He said, “I will send the Holy Spirit, just as my Father promised,” “but tarry ye in the city of Jerusalem, until ye be endued with power from on high.” (Luke 24.49). The disciples, 120 of them went on to find an upper room in Jerusalem where they all lodged and “these all continued with one accord in prayer and supplication, with the women, and Mary the mother of Jesus, and with his brethren.” (Act 1.14). They prayed and watched until they saw the Holy Spirit come on each of them; they waited. This is waiting – Praying, Watching. They had to go to Jerusalem and spend time together. They could just say, “I could wait at my home. Why should I go to that upper room?” They did according to the Lord’s word. Jesus told them to stay in the city until the Holy Spirit comes and fills them with power from heaven. They did. They did not leave until the promise of God came to pass. So many times we leave. God told us something – we wait, wait, wait – nothing, then we leave. We leave just before the fulfilment of God’s promise.

The truth is that God always works in partnership with a man when it comes to the affairs of the earth. “The heaven, even the heavens, are the Lord’s: but the earth hath He given to the children of men.” (Psalm 115:16). Even in the most costly sacrifice that God paid for the redemption of mankind men saw to it that it came to pass. Many people interceded to see that the promise was manifested in the natural. One of them was Anna. Anna, a prophetess who was widowed after 7 years of her marriage as a young woman was called into a dedication of interceding for the coming Savior.

She was not got married again but was in the temple every day and night in fasting, prayers, and supplication for 84 years! Then the Savior came. Remember the Savior was promised by God Himself to Israel but we see the participation and partnership in waiting.

Psalm 62:1 “Truly my soul waiteth upon God: from him cometh my salvation.”

Waiting, for us – believers, is a state of the soul. It may not be an activity or inactivity, it is the constant looking of the soul, constant focus of the mind on the word of the Lord. It is prayer. It is service. It is advancement. It is keeping the vision and the word alive in you. It is meditation. It is getting more clarity of the word given. It is talking right. It is consuming.

Isaiah hits it on the point. Isaiah 26:8 “Yea, in the way of thy judgments, O Lord, have we waited for thee; the desire of our soul is to thy name, and to the remembrance of thee.”

When David was anointed by the Lord as king of Israel, he was to wait for it to be manifested. It took 13 years for him to be ready for the throne. He didn’t sit idle waiting for the throne to come to him all these years. He knew that every king is a brave warrior so he began to walk as such. He stood up from his knees after the anointing and returned to his sheepfold to open his own training barracks in the wilderness. He used the stone and the slings to defend his father’s sheep as a king would. He knew he wasn’t just a nomadic shepherd boy. When the lion and the bear came others ran away because they were mere shepherds. King David couldn’t run. He had drawn the battle strategy and was ready. He told Saul, “I have been taking care of my father’s sheep and goats… When a lion or a bear comes to steal a lamb from the flock, I go after it with a club and rescue the lamb from its mouth. If the animal turns on me, I catch it by the jaw and club it to death.”(1 Samuel 17.34-35) Wow!

That was the confidence he drew from in the face of Goliath. Hear him again “‘I have done this to both lions and bears, and I’ll do it to this pagan Philistine, too, for he has defied the armies of the living God! The Lord who rescued me from the claws of the lion and the bear will rescue me from this Philistine!…’ Saul finally consented. ‘All right, go ahead, may the Lord be with you!’ (1 Samuel 17:36-37). If you have been in the place of waiting, even Saul cannot deny you the chance to take the wheel because the place of waiting is the place of training. His waiting was to be for many other years before he sat on the throne

Many times the period that elapses between when you get a promise from the Lord or a prophecy and the time you see it come to pass is the training period. It is the period when you must be made ready for the throne. You yourself know like Gideon that you are not the mighty man of valour that the angel has described you to be (Judges 6). You know you cannot sit on the throne as you are now. This is how it always is because God sees what you can become, so when He begins to speak to you He is calling those things that be not as though they were. Wait on the Lord.

God put you here on this earth that you can be Noah, David, Anna, disciples… to build the kingdom, to help the poor, widow, sowing kindness into this broken and confused world. If you start doing that, God will bless you. He is not a debtor. But what we need to do is we need to take responsibility. God has given you responsibility. Even if you do not see a promise fulfilled during your lifetime, the next generation will reap the harvest which you have been sowing for years. We need to think how God thinks, but not how we want to think. ‘Me’ has to go. The harvest is plentiful but the workers are few. Let us be those few. Let us go and change the world. Let us wait on God and at the same time, act with God.

I hope this article has encouraged you to wait on God, eagerly wait for God’s promise, and act with God at the same time. Do not be discouraged. Sooner or later, you will receive your promise.

Latest Spirit-Filled Posts. I Pray as You Read them, You Will be Blessed, Revived and Encouraged:

2 thoughts on “Waiting on God and Acting with God”