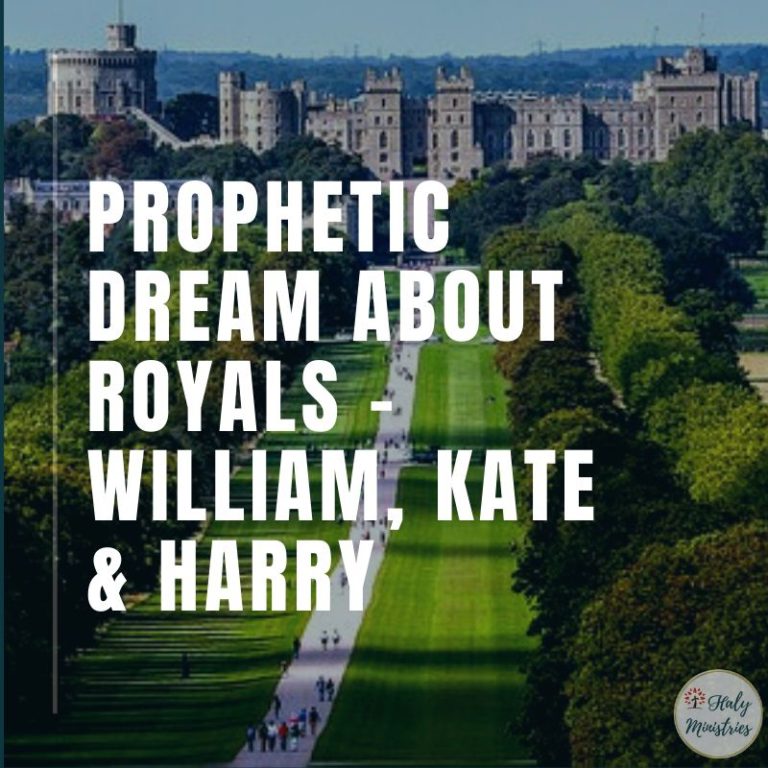 Before I tell you a dream about William, Kate and Harry, I would like to remind you of Samson’s story.

Samson wanted his own way. He wanted to marry who he wanted. He saw a young Philistine woman and said to his parents to get her for him as his wife.

His parents, of course, resisted and replied, “Isn’t there an acceptable woman among your relatives or among all our people?” They gave very good advice to the young man but he did not want to listen to their advice and got what he wanted. His whole life was like that. He did what was good in his own eyes. If he listened to his parent’s advice, he would escape the trap of the enemy.

God has given us loyal friends, a family who could help us to see a different side of the coin. We need each other. We can be so sight blinded and trapped, thinking our way is the best. Our flesh always will have its own opinion. In 1 John 2:16, it says that this world offers only desires for physical pleasure, desires of the eyes and pride in our achievements. These are not from the Father but are from this world.

In the dream, I wanted to go and see inside a palace, not Kensington Palace. I came to buy a ticket but the woman asked me to come the next day. Then, William and Kate told me they wanted to join too.

The next day we were together. A tour group, William and Kate was part of, stopped and called me, asking to come and look at the ditch. I thought, “What could be so exciting about a ditch?” I went to look, it was like a ditch going down with some bushes around.

After that, we – I, William and Kate, we were having a picnic, enjoying our time together, chatting. In the middle of our great time, Harry came. He opened a book and started showing us the staff we could buy from him. He went from the top, saying, “If you buy this and if you buy that..” showing what we could buy. Of course, he interrupted the best time we, William, Kate and me, had together. I thought, “Why should I sit here and waste my time listening to him and his advertisement?

So I stood up. As soon as I rose to my feet, a dog appeared. It was a white shepherd dog. It was looking at me like a dear friend and clung so close to me. The dog’s eyes were like a written love letter. Those eyes were a reflection of love and loyalty. I wanted William, Kate and Harry to see that the Good Shepherd was always by our side. After that, I and the dog left and went to explore more what was in the palace.

Interpretation of the Dream

When God speaks through dreams to me, the majority are about future events, be it about world leaders, countries, individuals… This dream carried the prophetic appliances and showed what was in the hearts of royals.

I went to explore what was inside palace the next day. It meant that the completion of the dream would take place not in 2019, but next year in 2020.

William and Kate, their hearts are about royal duties. They were willing to learn and wanting to explore about kingdom. In the near future, they are going to learn more and will be given more responsibilities. That was a good part.

But I did not want to believe that “how to sell well” was talking about Harry and his future actions. My honest reply to God was, “God! No, this is not Harry. He is not like that!” I dismissed the whole dream. I shared it with dream interpreters in October 2019. Now with all that is going on, I see my dream is very prophetic.

As you all know Harry and Meghan have decided to step down from their royal duties. The first announcement of their departure was made on the 9th of January 2020.

On the 18th of January the Queen had to make the announcement and probably the hardest decision about Harry’s future. From spring, they will have to repay £2.4m of taxpayer money for the refurbished of Frogmore Cottage, which will remain their UK family home. They will no longer use their HRH titles and will not receive public funds for royal duties. The couple will also no longer formally represent the Queen.

One of the UK TV presenters commented, “Well done, Your Majesty – right decision. Only surprised it took her so long to get Harry to ditch his family, the Monarchy, the military and his country.”

In his statement, he mentioned the verb “to ditch”. That was exactly in my dream – a ditch. ‘To ditch’ means to get rid of something or someone that is no longer wanted. That’s what happened with Harry. Sadly, he ditched his family, the Monarchy, the military and his country. For what? He has fame. He does not need one.

I opened this letter with a story about Samson. We can sell our strength to someone or something else, just to feel good. Will that “feeling good” last? It’s only for a short time. But the true friendships last! The Lord told me, “Harry is losing it!”

Of course, Harry is free to make his own decision. But his decision will cost him dearly in the near future.  If he continues moving in the wrong direction, it is not going to end well for him.

We All Can Learn From The Dream

This message is for all of us. We need to stay alert and walk in discernment always! We can easily sell our birthright, which has to do with position and inheritance, for a bowl of stew, like Esau did, satisfying our flesh desires, its appetites.

If you feel drained, emotionally exhausted, ask yourself, “Who or what is draining you, tiring you, either physically or emotionally?

Father, I pray that Harry will come back to his senses. With all of my heart, I pray for Harry’s protection. Like that shepherd’s dog, who was Jesus, appeared to me, I ask You, our true Shepherd, lead Harry to good pastures. Let Harry see that he is loved by You. Come into his chaotic mind and speak your peace. Speak to him in dreams.

I pray that Harry turns away from his ways or his paths, and return to his purpose, his position, his inheritance, and his journey.

Father, I pray that William, Kate, Harry and their families will taste and see that You are Good! Thank You, Lord. Amen.

3 thoughts on “Prophetic Dream About Royals – William, Kate and Harry”